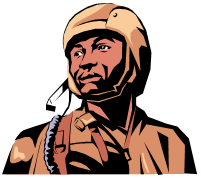 The army has upped its recruiting efforts by upping its sign-on bonus to $20,000. The new sign-on bonus has resulted in more recruits considering joining the army. The army is in a recruitment slump and is hoping that the $20,000 bonus will help motivate recruitment of potential soldiers. The United States death toll of military in Iraq and Afghanistan has led many parents and young people to become wary of joining the military during this time.

During a student’s 12th grade year, there many military officers that may come to his/her high school to speak about joining different branches of the military. Seniors and recent high school graduates frequently receive postcards and other marketing material from the United States military in the mail. Students need to make an informed decision about joining the army. Parents need to discuss the pros and cons with their children.