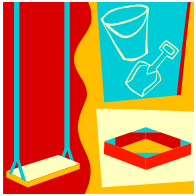 Tampa’s new playground will be part of community effort of more than 200 volunteer gathering at Ragan Park on August 11th to create a multigenerational playground.    In addition to the traditional playground equipment for children, there will be fitness stations and walking paths that adults can use to get fit and stay active.