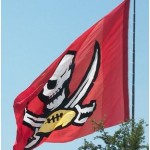 The Tampa Bay Buccaneers have a perfect season so far-even though it is just the first two games of the season.  It is pretty good to say that after the heartbreaking season that they had last year when they finished 3-13.  With the momentum they have now fans are looking for quarterback Josh Freeman to continue to find his element and coach Raheem Morris to develop the team.

It is not secret that last year’s record and the uncertainty about this young team had a negative effect on the ticket sales.  Now that the team has a couple wins hopefully that means that they can win over some of their fans  and have seats purchased for the games.